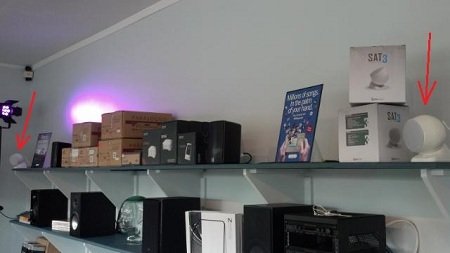 "I'm actually a speaker designer. I build 'em. Have for decades. And I'm good. Interestingly enough, I did sub-satellite systems before BOSE did. I've been doing them for thirty years now. But from a small manufacturing standpoint, I can't compete with what a factory can do. I can't build them small enough.

Well, Dan, my inside sales guy, happened to see that little eight-second video on your SAT3 satellite speakers and said, 'That just looks cool as hell.' He told me about them and I said, "Gosh, let's get 'em in here. Let's take a look."

We ordered them in and they got here just a day or two ago. Well, I heard all this racket in the showroom and Dan comes around the corner and says, "Come here." He had them fourteen feet apart on the shelf... and they still imaged great!

He had them aimed straight out and I had to stand right in the middle to hear it. I've carefully tilted them in over the past twenty-four hours and got that image to be solid over a broader area in the middle. But they image really, really well.

And they go lower than the similar-sized Canton's. They've got more bottom end. And they still managed to stay warm through the mids. Canton's got a better tweet, but there's nothing the matter with the tweet in the SAT3. Nothing at all. Plus, the Canton's cost more. We were just amazed at how much low end the SAT3's had... more than anything in that range with the Canton's."