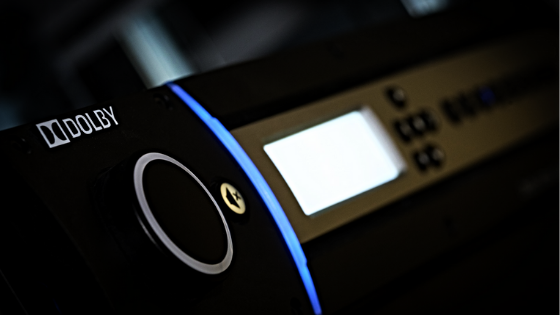 Dolby Atmos surround sound has been compared to the clarity of a 4k T.V., only it's for your ears. For those of you who are audiophiles, Dolby is definitely the best hearing experience that you can possibly hope for in an in-home theater. It is the first cinematic audio format where sounds exist as individual entities, referred to as audio objects.

It’s metadata that is used by compatible audio gear to control which speakers are reproducing certain sounds.

Dolby Atmos was made to replicate every sound in the original cinema mix as an audio object. This is what allows sounds to be interpreted as three-dimensional objects. The ultimate goal of this system is to make you as the viewer (and listener) feel like you are right in the middle of the action, in the scene of the movie right on the screen. The Dolby Atmos system places sound above the audience and this is what makes most of the experience work so well.

With the concept of having any sound mixed as an audio object, the sound is then placed by itself into three-dimensional space. This is what gives you the feeling of real-life involvement and allows you to enjoy every sound in a “positional view”. Instead of having the sounds designated to one specific speaker, it is positional, so if it is a helicopter flying closely above your head on the screen, then that is how you will hear it.

While watching normal films, on a regular T.V., with a sub-par speaker system, the sound is delivered to you on channels. These channels are assigned to certain speakers that are placed in the room. So, if there is someone yelling at you from the left, then that sound will be assigned to the left positioned speaker. The issue with channels is that if the screen shows a tornado, circling the screen and coming down from above, the audial experience will not be as realistic due to the lack of speakers.

* For each of these applications, it is important to set the audio output of your device to bitstream output. In addition, be sure that the secondary audio functionality is disabled. Using an HDMI connection, connect all of your devices to your Dolby Atmos-enabled AVR. 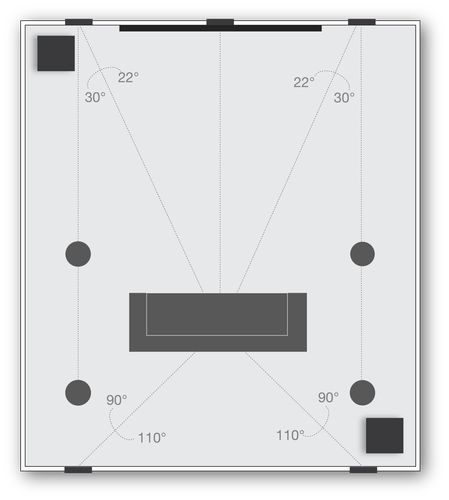 Some manufacturers may support more than one subwoofer output but Dolby Atmos technology has a single LFE (Low-Frequency Effects) signal. Most installers will have a designated layout for your speaker systems. For the 5.1 and 7.1 speaker layout, and then add four overhead Dolby enabled speakers and the layout becomes 5.1.4 and 7.1.4. Those are the most common and work well with most average-sized theater rooms. For further diagrams and arrangements, refer to the Dolby Atmos website. Dolby does have the ability to support more speaker positions than the above mentioned 7 (11) and 5 (9) up to a maximum of 34 total speakers (24.1.10). Ideally, this would be a great setup, but it also would be very expensive and you would definitely have to have the available space in one room.

Generally, when a Dolby Atmos system is purchased, you want to be able to enjoy all of its capabilities, even when the media is not mixed in Dolby Atmos. You want to still take advantage of the overhead and Dolby Atmos-enabled speakers because you want the full movie-watching experience to be awesome! Especially in the comfort of your own home. There is a new upmixer that is a part of the Dolby Atmos technology bundle and this upmixer was made to be compatible with traditional channel-based and Dolby speaker systems. What the Dolby upmixer does is expands the audio of channel-based content (includes Native Streaming, 5.1, and 7.1 content) for playback through a Dolby Atmos system. This upmixer allows for a more spacious audio ambiance. Dolby states, “This new technology will process and upmix channel-based content to as many as 17 speaker locations at listener level and to 10 Dolby Atmos-enabled or overhead speakers.”

If we are talking about popularity with audio buyers in business and in commercial applications movie theaters broadly use Dolby Atmos more frequently. Theaters are not as excited about DTS:X and have not been incorporating them into their cinemas the way that they have with Dolby. Although, Dolby does have market connections and this has helped them sell more products and place Atmos more widely.

DTS:X can be encoded with a higher maximum bitrate than Dolby Atmos. However, this does not mean that DTS:X is the better option. When the two are compared in an audio test, very few if any listeners have been able to reliably determine the difference between them. In reality, the difference in sound quality is extremely minimal.

The reason that DTS:X is even being compared to Dolby Atmos is that it could theoretically encode audio that is mathematically more accurate than Dolby. Unless they are a professional, the person listening will likely be able to tell the difference. Dolby Atmos produces smaller files with its more efficient compressible codec, meaning more data can fit on the disk. The main question on our minds is that if you can’t tell the difference, does the compression really matter?

Dolby Atmos is a little bit further ahead, due to their broader compatibility with other visual platforms. Dolby Atmos users can get compatible audio from Netflix, Amazon Prime Video, iTunes, Vudu, and most Blu-Ray releases, and even more recently video games are now offering Dolby Atmos capabilities with systems like Xbox One. DTS:X, on the other hand, is only offered on specified product releases. With the updates of the Dolby system the price will continue to increase as everything else does.

TruAudio has all of the speakers that you will need for your home theater design, no matter what application, and whether it is for a Dolby Atmos setup or a normal surround sound layout, TruAudio can provide you with the best speakers for your ideal budget.